The 1970 Dodge Dart is an iconic and collectible car that marks both a transition for the Dodge Dart nameplate but also for the American automotive industry. This page is dedicated to providing information and resources about the 1970 model year.  To see current 1970 Dodge Dart cars listed for sell see our 1970 Listings feed.

Why 1970?
The 1970 model year was a pivotal time not only for the Dodge Dart but for the automobile industry as a whole. Increasing safety and environmental standards forced major changes to cars of the time such as side marker lights and reflectors among other changes such as federally mandated steering column ignition locks.

The 1970 model year is important to the Dodge Dart because it includes many major design and option changes. It is also a year that includes the popular Swinger 340 model.

For both of these reasons and more, the 1970 Dodge Dart is one of the most sought after classic Dart model years by collectors, restoration buyers and enthusiasts.

Read below to learn more about the Dodge Dart history including specs and features.   If you have come here looking to buy a used 1970 Dodge Dart, use our For Sale section to the right.

The Dodge Dart was a classic car made by Chrysler for the Dodge brand from 1960 to 1976. It began as a full-size car and eventually ended up as a compact. Dodge has also reintroduced the Dart nameplate for a new line of compact cars, however this vehicle is unrelated.

In 1970 Chrysler redesigned the Dart with major front and rear changes to align it closer with full-size Dodge vehicles. This included both grille and counter changes along with rectangular tail lights, wedge-shaped bumper. A new deck lid and quarter panels were also introduced. One major impact of the redesign was trunk space being reduce by nearly 50%.

Other major changes for model year 1970 are as follows:

The popular Swinger model was applied to all Dodge Dart 2-door hardtops except for the Custom trims. The Convertible trim was also discontinued. The top line performance Dodge Dart remained the Swinger 340 2-door hardtop from 1969. This highly sought after model included the following features and equipment.

Pictured below are various 1970 Dodge Dart photos. None of these images are owned by ClassicDartClassifieds.com all images rights of respective owners. 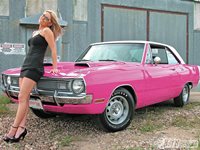 Anything else to add? Let us know in the comments section below…